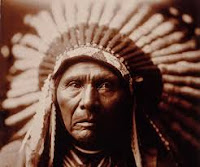 [These are the words of the great tribal leader of The Suquamish, Chief Seattle, excerpted from Dr. Simonovic's work, Mind and Philosophy, part of his critique of Heidegger.  It has been my great privilege and pleasure to proofread some of Simonovic's growingly influential writings.  And though these words are from the 19th century Native American philosopher, they vividly reflect the spirit of my dear Serbian comrade and resonate strongly, even painfully, with the despair of an over-Trumped U.S.A, a country on which Private Capital has long since foreclosed. --cm]

“How can you buy or sell the sky, the warmth of the land? The idea is strange to us. If we do not own the freshness of the air and the sparkle of the water, how can you buy them? Every part of this earth is sacred to my people. Every shining pine needle, every sandy shore, every mist in the dark woods, is holy in the memory and experience of my people. The sap, which courses through the trees carries the memories of the red man. The white man's dead forget the country of their birth when they go to walk among the stars. Our dead never forget this beautiful earth, for it is the mother of the red man. (....) We are part of the earth and it is part of us. The perfumed grasses are our sisters; the deer, the horse, the great eagle, these are our brothers. The rocky crests, the juices in the meadows, the body heat of the pony, and man --- all belong to the same family (...) We know that the white man does not understand our ways. One portion of land is the same to him as the next, for he is a stranger who comes in the night and takes from the land whatever he needs. The earth is not his brother, but his enemy, and when he has conquered it, he moves on. He leaves his father's grave behind, and he does not care. He kidnaps the earth from his children, and he does not care. His father's grave, and his children's birthright are forgotten. He treats his mother, the earth, and his brother, the sky, as things to be bought, plundered, sold like sheep or bright beads. His appetite will devour the earth and leave behind only a desert. (...)The air is precious to the red man for all things share the same breath, the beast, the tree, the man, they all share the same breath. The white man does not seem to notice the air he breathes. Like a man dying for many days he is numb to the stench.(...) You must teach your children what we have taught our children that the earth is our mother. Whatever befalls the earth befalls the sons of earth. If men spit upon the ground, they spit upon themselves. For whatever happens to the beasts, soon happens to man. (...). The earth does not belong to man; man belongs to the earth. This we know. All things are connected like the blood, which unites one family. All things are connected. Man did not weave the web of life; he is merely a strand in it. Whatever he does to the web, he does to himself. Even the White Man, whose God walked and talked with him as friend to friend, cannot be exempt from the common destiny. (....) The end of living and the beginning of survival...”
Posted by CirqueMinime/Paris at 10:06 AM