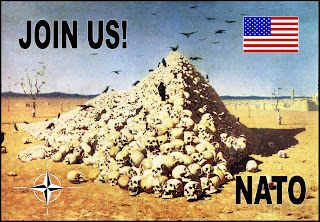 by Duci Simonovic
International Criminal Law - From Justice to Oppression - by Me Christopher Black
by Mick Collins on Wed 20 Jul 2011 10:12 AM EDT | Permanent Link
[Chris Black is the Defense lawyer who taught me about International Criminal Defense. Diana Johnstone introduced me to Chris back in the late 1990s; Chris, then, introduced me to Jacques Vergès and the whole Yugoslav dossier: Vlada Krsljanin, Tiphaine Dickson, Cathrin Schulz, Klaus Hartmann and the ICDSM (including the enraged Serbian philosopher/poster artist Duci Simonovic); and then, on a brief TGV trip from Paris to Brussels, to attend memorial services for his client’s 16 year-old son, Alain, an event in which, despite guarantees from all the major powers of his return to UN custody in Arusha, General Ndindiliyama was never allowed to take part, Chris introduced me to the Rwanda case and brought me onto The General’s Defense team as a sort of literary side-kick.

The truth about Rwanda, in particular, but, more generally, about all the Secret Wars of the Great Powers in Eastern Europe, Central Asia, the Middle East and Africa, has become a kind of, however Quixotic, mission from god for CM/P.

Now that The General has been, de facto, acquitted of the mega-charges against him at the ICTR—as in the Military I case in 2009, where all charges of conspiracy or plotting to commit genocide went unproven, but due to an order from the Appeals Chamber instructing the Trial Chamber to ‘take judicial notice’ of the 1994 Rwandan Genocide (of 800,000 or so Tutsis by the 1994 Hutu {read: majority} governments of that tortured nation), an order whereby the various charges of genocide are allowed to stick despite their being TOTALLY UNPROVEABLE, the Tribunal found it necessary to ‘convict’ all the Defendants of the worst sort of humbuggery, and hand down arbitrary sentences, ranging from 30 years to ‘time served’, as a way to justify its remaining on the UN’s juicy teat: so General Ndindiliyimana got cut loose for ‘time served’.

Ok, despite its grotesquely capricious practices, this was one ICTR call that both Chris and I accepted with happy satisfaction. The General was free! At last!!

But then something came up, and he was again denied permission to return to his home and family—again for 'political reasons.' And The General is not the only ICTR Defendant to be acquitted or have his conviction overturned on Appeal, only to be made by the world media, and the 'Public Opinion' it (de)forms, to pack around his original charges as a kind of 'Silent beef', from which there is no redress or relief. These Defendants, though legally innocent, are condemned to lead the non-lives of Society's outcasts.

So much for the NATO Terrorists’ version of International Justice: A putrescent piece of road-kill on the highway to militarized Global Wastage.

But here’s Me Black’s take on just what NATO Justice smells like. –mc]

International Criminal Law - From Justice to Oppression
by Christopher Black

The Nuremberg Trials of 1946 advanced international law in a fundamental way. For the first time in history the victims of aggressive war brought their attackers to justice, and aggression was defined as the ultimate war crime from which all others flow. Today, international war crimes trials are used by the aggressor to persecute the victims of their aggression. International law has turned full circle from justice to oppression, from justice to revenge.

What can better illustrate this than the one-sided justice at the ad hoc tribunals, the ICTY and ICTR{1}, where the victims of western aggression are grossly slandered and accused of the most heinous crimes in order to obscure the real facts of those aggressions under a cloud of darkness and confusion. What can better illustrate this than the statement by the judges of the ICTR in the case of General Ndindiliyimana{2}, from its just-released judgment in the Military II case {3}, coming at paragraph 2191:

“The Defence submits that the indictment and arrest ‘were motivated by political
reasons’. The Chamber recalls that before this Chamber, the Defense stated that the
prosecution made every effort to encourage Ndindiliyimana to testify against Colonel
Bagasora, but Ndindiliyimana refused. The Prosecution did not deny this. Following his
initial refusal, the Prosecution produced a far-reaching indictment charging
Ndindiliyimana with a number of crimes… Most of those charges were eventually
dropped.”

As the judges at the ICTR revealed that the court’s prosecutor indicted people for political reasons, the ICTY demanded that Serbia hand over General Mladic{4} for allegedly engaging in a “joint criminal enterprise” to kill Croats and Bosnian Muslims. General Mladic maintains that he defended Serbs from the criminal actions of the Croat and Bosnian Muslim forces attacking his people, for which there is abundant evidence. Yet, once again, the victim is the accused and the witnesses brought against him are partisans of the aggressor.

Now, we have the absurdity of the International Criminal Court issuing criminal indictments against various Africans whose common connection is to obstruct Western interests in Africa. The latest indictment against Colonel Ghaddafi, made because his country resists the aggression and war crimes of the USA and its satellites in Europe and Canada, shows, even to the blind, that control of the ICC has been seized by the USA, even as that country refuses to be subject to its jurisdiction.

Never in history has “criminal justice” been perverted to such criminal ends. The most shocking aspect is the complete acquiescence of the nations of the world in this charade. Members of the Security Council, apart from the United States, have the power to nullify the ad hoc tribunals but they do not. They have the power to refuse to bring clearly political accusations to the ICC. But they do not. It is they who are in charge and who are responsible, just as much as the USA.

Indeed, the entire structure of “international justice” since 1946 has become so corrupted that it is difficult to see how it can be transformed into a vehicle to stop aggression, as it was intended, instead of a propaganda tool justifying it. The rot has spread everywhere.

The nations of the world must once again stand up and demand that the principles of the United Nations Charter be adhered to. They were thought important once. They are important now. The United Nations must demand that this architecture be dismantled, that international justice be restored, in the true sense of the phrase, and that national sovereignty and the self-determination of peoples be inviolate once again. But this architecture cannot be dismantled until the Security Council is abolished and the United Nations General Assembly represents the true interests of the peoples of the world in complete equality.

{2} Major-General Augustin Ndindiliyimana, Chief of the Rwandan National Gendarmerie at the time of the troubles.

{4} Ratko Mladić came to international prominence in the Yugoslav Wars, initially, as a high-ranking officer in the Yugoslav People's Army and, subsequently, as the Chief of Staff of the Army of the Republika Srpska (the Bosnian Serb Army) in the Bosnian War of 1992–1995. On 24 July 1995, Mladić was indicted by the International Criminal Tribunal for the Former Yugoslavia (ICTY) for genocide, crimes against humanity, and numerous war crimes (including crimes relating to the alleged sniping campaign against civilians in Sarajevo). On 16 November 1995, the charges were expanded to include charges of war crimes for the attack on the UN-declared safe area of Srebrenica in July 1995.


Christopher Black, International Criminal Lawyer Toronto, Canada. The views expressed in this article do not necessarily reflect the views of Radio Netherlands Worldwide.
Posted by CirqueMinime/Paris at 3:37 PM No comments: