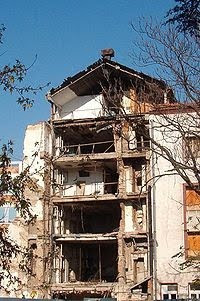 FREE Dragoljub MILANOVIC!
PUBLIC PETITION
Freedom for Dragoljub Milanović!
To the President of the Republic of Serbia
To the Prime Minister of the Republic of Serbia
To International and Serbian authorities concerned
To Human Rights Organizations
At 2.06 a.m., in the night of 22-23 April 1999, NATO planes fired a heavily loaded missile at the Radio-Television Serbia building located at 1, Aberdareva street. The explosion killed 16 RTS workers and caused enormous damage.

Even though this was clearly a war crime against the civilian population, even though it is well known, bearing in mind the NATO command system, who ordered this attack, and even though it can be easily learned who actively commited this crime, not one of them was held accountable for this monstrous act. Criminal proceedings launched in the Federal Republic of Yugoslavia against the NATO leaders with regard to this crime, among others, were terminated, the International Tribunal for Former Yugoslavia in The Hague found that there were no grounds for action against the responsible persons with NATO, and the European Court of Human Rights found it had no jurisdiction to deal with violating the right to life of the RTS workers.

The only person ever convicted for this crime is the then head of the institution that was the target of these air strikes, the RTS General Manager, Dragoljub Milanović, a man who, by some odd chance, escaped the fate of sixteen of his employees. Thus to this heinous crime another crime was added, and shamelessness soared to its peak.

In 2002 Dragoljub Milanović was sentenced to 10 years imprisonment for a criminal offence, 'a grave offence against public safety,' under Article 194, paras. 1 and 2, of the then applicable Criminal Code of the Republic of Serbia. Such criminal offence, as was defined in the Criminal Code, could not have applied to Dragoljub Milanović,even if the factual statements made against him had been true, which they were not. In these shameless proceedings, the key evidence for the presumed guilt of Dragoljub Milanović was the alleged 'Order 37,' issued by the Government, represented as a state and military secret that Milanović allegedly refused to activate and move the employees to a reserve operations location in Koöutnjak, on the outskirts of Belgrade. However, such an order was not presented at trial as an evidentiary document, duly signed, stamped, registered and filed, but it seems the text of that 'order' was printed from a computer, bearing no signature or stamp, the text of unknown authorship, and time and intented receiver or the purpose for which it was composed.

According to the testimony of Slobodan Perisić, the then RTS assistant general manager, who, in early April 1998, had been assigned by Milanović all the powers related to defence and protection, along with the authority to sign documents, the original copy of that notorious order was burnt on October 5, 2000*, along with his bag. Anyone with the slightest knowledge of administration matters knows that no document, even if not of such importance, is ever copied only once, but that the signed and stamped originals of such a document would have to be kept also in the files of the authority proposing its adoption, the authority adopting it, and the organisation to which it applied. The last place such a document, moreover, its only original copy, would have been allowed to sit, a year and a half after its adoption, was in Slobodan Perisić's bag.

Therefore, the court sentenced Dragoljub Milanović to ten years imprisonment based on the piece of paper, probably printed from a computer, a paper that was not signed, stamped or filed!

But even so, that piece of paper, the so-called 'Order 37', contains point 6, granting the General Manager the right to approve its cancellation, in other words, the right not to execute this order.

In addition to all this, it should be taken into account that the Radio-Television of Serbia building is a civilian structure, that international humanitarian law prohibits military attacks against such facilities, that such attacks are a war crime, and that no one can be blamed for not foreseeing that somebody else will commit an illegal act, especially an act of such gravity, a war crime. Otherwise the responsibility for one's unlawful conduct transfers to the one who assumed and believed that law is to be upheld, which results in a negation of law. In Dragoljub Milanović's case, just such an inversion was performed, which undermines the very essence of law and justice.

Furthermore, both before and after the beginning of NATO air strikes, the RTS building in Aberdareva was the venue for rendering technical assistance to numerous teams of journalists from various countries, including the NATO member states, which meant that they used to spend considerable amounts of time in that location. It even so happened that the then minister for mass media in the Republic of Serbia Government, Aleksandar Vučić, was invited to make a live appearance on a famous TV show, 'Larry King Live' on the US TV network CNN (unlike the 'Order 37', this event is supported by clear material evidence: a telegram sent to Vučić by CNN). The minister's mother, Angelina Vučić, an RTS journalist, was in the building in Aberdareva at the time of the missile strike, and by chance survived it, unlike 16 of her colleagues. Even Dragoljub Milanović, himself, from the very beginning of bombing campaign, was in the building in Aberdareva every day, working until the early hours of the next morning. In the night of the hit, Milanović left the building a dozen or so minutes before the missile struck. Therefore, it is obvious that no one, including Dragoljub Milanović, thought that NATO would commit such a drastic violation of humanitarian law, and, with a highly destructive missile, target the RTS building, clearly a civilian facility in the very centre of Belgrade, where a large group of civilians were present at the
time.

The courts involved in actions against Dragoljub Milanović ignored all these clear-cut facts, admitting an invalid, actually a non-existent piece of evidence, and by wrongly applying law, i.e. a Criminal Code article applicable to completely different situations, issued the condemning judgement.

A particularly alarming fact is that even the parents and family members of some of those RTS workers killed became victims to a cunning manipulation, and, in grief and despair over the loss of their loved ones, accepted the claim that their deaths were the fault of the RTS manager and the Serbian Government, and not of those ordering the missiles fired at the building in Aberdareva and those executing that order.

Dragoljub Milanović started serving his prison sentence on April 1, 2003. Since the terms of his conditional release have been met, in accordance with Article 46 of the applicable Criminal Code of the Republic of Serbia, Dragoljub Milanović applied to the court for parole. To this day, no answer has been given with regard to this application.
(note: Shortly after the draft of this petition, on 27th of September 2010, the Higher Court in Belgrade denied the request for early release!)

Because of all that has been related above, we hereby demand the following:

We are demanding justice for Dragoljub Milanović! We call for his immediate release from prison!

We are demanding that those who ordered and executed the crime committed on April 23, 1999, by bombing the Radio-Television of Serbia building in Belgrade, be held accountable! Only then will justice be served for victims of this crime!

We are demanding the retraction of the monstrous message being sent to all the terrorist
criminals the world over in trying and convicting Dragoljub Milanović:

Kill freely, and your criminality will be laid off onto the victims of your crimes!

To sign, go to: http://www.free-slobo.de/
Posted by CirqueMinime/Paris at 5:03 AM No comments: