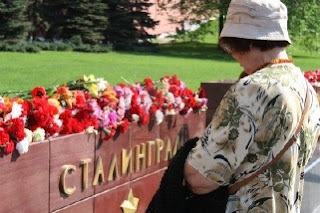 [To commemorate this 70th anniversary of the great Anti-Fascist victory by the Soviet people at Stalingrad, we are posting another essay by my dear friend and strong comrade Duci Simonovic—aptly enough, on Revolutionary violence.

Violence and needless destruction have always been the daily bread and mother's milk of Fascism, the ideological rationale for a feudal-nostalgic Waste Capitalism.  Unlike the great cataclysms of the last century, today's imperialist wars are not waged to gain territory or to seize and dominate the wealth of nations, but merely to continue the artificial life-support of a long-moribund political-economic system, no longer capable of sustaining itself by meeting human need through a vigorous, free exchange of value circulating throughout the society, and now relegated to pointless and hopeless destruction of all the riches of our planet as well as the inevitable annihilation of the whole of Humanity.

Seventy years ago today, 2 February 1943, the good guys won a great battle and saved Human History from its negation.  Yet, sad to say, though Evil may not be invincible—and though the Human Spirit's longing for Liberty, Justice and Peace is undiminished, as can be seen in the democratic revival of the 2012 US elections—Fascism is a hope-to-die, double-mag-my-AR, tape-the-C4-to-my-nut-sack, point-me-toward-the-nearest-kindergarten, and I'll-see-all-y'all-at-Chili's-for-Happy-Hour—kind a dope-fiend-terrorist.

The Nazis had the sexy, Hugo Boss technology,  the Stuka and the Panzar, but the Soviets had the dour Power of the People.  Used to be the Power of the People would always trump the Man's technology.  But that was then; now the Man's hustle has gotten a lot tighter.  Even though there can be no ultimate winners in the Super Bowl of Life, the divine tout still can't help himself and just has to rig the match—so’s, at least, he won’t get played. 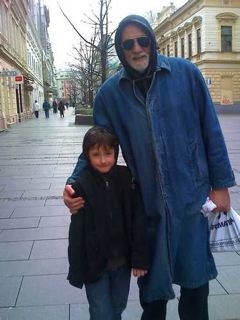 The notion of violence has a historical nature. In modern times, it is determined according to the basic human and civil rights, proclaimed in the French Revolution, which form the basis of modern humanism.  Concretely, the nature of the ruling order conditions the nature of the prevailing  violence. In liberal capitalism, the prevailing violence was based on the principle bellum omnium contra omnes. In monopolistic capitalism, the prevailing violence is based on the principle “Destroy the competition!”. It is not characterized by a struggle between citizens, who are reduced to atomized private subjects, but by a struggle between gigantic corporations. The prevailing contemporary violence results from capitalism as a totalitarian destructive order.
From the historical point of view, violence has an emancipatory dimension.  Departing from the American and French Revolutions, Marx came to the conclusion that “violence is the midwife of history”. From the onset of capitalism, bourgeois theorists insisted on the right to combat the prevailing violence, including the armed struggle. Locke and Kant share the view that free citizens not only have the right to oppose the violence threatening their freedoms, but that the opposition to violence is their most important civic duty. For Njegos, “to place a foot upon tyranny's neck, this is the most sacred of man's duties”. Following in the footsteps of this emancipatory legacy, Lenin put forward a theory of ”unjust” (conquering) and “just” (liberating) wars. According to Marx, violence in a proletarian revolution is not the aim, but the means for doing away with capitalist tyranny. With the development of political institutions, revolutionary violence has become one of the available means for abolishing capitalism. Engels' insistence on a ”dictatorship of the proletariat” is meaningless, because, after a (true) socialist revolution, classes will no longer exist, and there will only be free people whose livelihoods will derive from their own work.

Posted by CirqueMinime/Paris at 4:11 PM