The International Committee to Defend NATO/UN Politial Prisoners and POWs. 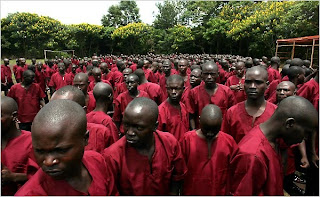 [above] Wakefield Prison, England; [below] Somewhere (everywhere?) in Rwanda
The International Committee to Defend NATO/UN Politial Prisoners and POWs.
[CM/P has recently been plotting, with Me Chris Black and some of our other tight comrades, to form a Defense Committee for all those Prisoners who opposed, in some way or another—even if only by association—the growing movement for regime conquest toward the Private Military acquisition and corporate administration of all heretofore Public or Social property and its productive forces. As a way of indicating that time, like money, is not ours in abundance, we received this message from friends in Belgrade:


THE BELGRADE FORUM FOR A WORLD OF EQUALS

The Belgrade Forum for a World of Equals addresses you on behalf of Ms Tamara Krstić from Belgrade, daughter of General Radislav Krstic who, pursuant to the verdict of the Hague Tribunal, is serving his sentence in the United Kingdom.

Last week, General Krstic was the victim of a brutal physical assault mounted by a group of inmates in the British prison at Wakefield. The immediate consequences include serious injuries (lacerations) to his neck and torso, substantial loss of blood, and coma.

All the circumstances gathered so far indicate that this attack was long-prepared and premeditated. It demonstrates the failure to ensure the safety of General KRSTIC in this or any other prison facility in the United Kingdom. Therefore, we beseech you to facilitate a transfer of General Krstic to another country, one that is willing to and capable of guaranteeing General Krstic’s safety, preferably to Serbia. We are sending pertinent petitions to the President of the Hague Tribunal, Mr. Patrick Robinson, in The Hague, to the UN High Commissioner for Human Rights, in Geneva, to the Secretary-General of the Council of Europe, in Strasbourg, to the President of European Union and to the mass media.

We would appreciate your earnest engagement and contribution in demanding the transfer, safety, and adequate medical treatment of General Radislav Krstic.

Belgrade Forum for a World of Equals

The Krstic ‘genocide conviction,’ the first and only such conviction on this squishy charge to be achieved by the ICTY, is based on plea bargained testimony from threatened co-defendant snitches, against an accused whose infirmity (he'd recently lost a leg and was heavily medicated) made it realistically impossible for him effectively to take part in his own trial, and the genocide charge was basically redefined by the Appeals Chamber to conform to the Trial Chamber's (evidence-lite) judgment (then the 61 year old's sentence was cynically reduced from 46 to 35 years)[1]. This finding is as humbug a piece of judicial chicanery as any that this Kangaroo court (that the Kangaroos would despise) has yet come up with.

With the Prosecution totally unable to prove, on the evidence, the actual occurence of the 1995 Bosnian genocide of 8,000 Muslim males or, its prototype, the Rwandan genocide of 800,000+ Tutsi & moderate Hutu in 1994, the ICTY & ICTR, to maintain their raison d'être, have had to resort to 'instructions' from their shared Appeals Chamber in The Hague to the Trial Chambers, ordering them to 'take judicial notice' of these 'genocide-like events'; (i.e, to stipulate to them without proof as ‘Natural Facts of Jesus’). These mass killings were racialist fantasies spun from the dank straw composted in Western stink tanks by the magical dwarves at the US DoD, NATO, the EU & the UN, into golden duvets to cover the grotesquely real mass slaughters these terrorist organizations conspired with their proxies to commit in the execution of their privatized wars to destroy the Yugoslav and Rwandan revolutions.

So, the creation of this International Committee to Defend the NATO/UN Political Prisoners and POWs (which must also include Palestinians, Iraqis, Afghans, Iranians et alia) is a simple act of Resistance to unprovoked military aggressions--crimes against the Peace--other war crimes and crimes against Humanity, and the financial, commercial and cultural occupations, unto the very hijacking of national Histories, that the world has been suffering through (and euphemistically calling a 'global economic crisis') since before the 'end of the Cold War.' And all have been carried out in the interests of private, corporate (i.e., Waste Capitalist) entities—be they decked out as national governments or NGOs.

This Resistance, a moral and legal obligation under national and international laws and conventions, is still, after 20+ years, in a formative stage. It is driven by the abject abandonment of these Prisoners (names like Krstic, Karadzic, Seselj, Milanovic and Markovic in Serbia: and Kambanda, Rutaganda, Bagosora, Bizimungu, and Ndindiliyimana in Rwanda, are just the few which immediately spring to mind), not only by the public conscience on its soporific and mendacious media IV, but by many of their own court-appointed defense counsels and the very ad hoc (and illegal) judicial institutions created by trans-national corporate interests to continue their military aggressions by extra-military—though no less violent—and quazi-judicial means (currently being used as 'career trampolines' by any number of otherwise unemployable professional sentimentalist hacks and self-ordained experts), as well as the abject trivialization unto total denial, by these same aggressors, of the Historical Record, just as the HR is being developed, revised and amended by evidence and information gathered through governmental and non-governmental judicial investigations and the independent research and scholarship of many of our friends and contributors.

David Peterson and Ed Herman are the sort of experienced and respected reporters and scholars who should not be expected to stick their necks out as they have in submitting such definitive work (from the Srebrenica Study Group) on the history of events at Srebrenica in 1995, or their recently (to be) released (in the May 2010 Monthly Review) radical reassessment of the so-called "100-day Rwandan Genocide of 800,000 Tutsi and moderate Hutu." But they have taken this risk for the sake of Historical Truth, International Justice and World Peace, and we very gratefully attach two of these works to this post.

So, when you sign David's petition, copy us here at cirqueminime@club-internet.fr, or leave a comment on this post. We will add you as a founding member of the International Committee to Defend the NATO/UN Political Prisoners and POWs. With national elections coming to Rwanda in August 2010 and the 10th Anniversary of the October coup d'état that overturned the duly-elected democratic government of Serbia/Yugoslavia, and eventually sent its sitting head of state, Yugoslav President Slobodan Milosevic, as a hostage-for-ransom to the old Nazi prison at Scheveningen, only to be iatrogenically terminated 6 years later—a murder of such protracted gruesomeness as to make the near instantaneous dismemberment of his Rwandan counterpart, President Juvénal Habyarimana, in an RPF missile strike against his presidential jet, seem almost merciful—with such momentous events looming near, History tells us that, though it may waste us, we have no time to waste.—mc]

Please read the following petition, which is self-explanatory.

If you are willing to sign, please send a message with your name, professional identification, city where you reside or country of citizenship, and email address to:

Voices of Concern for the Treatment of International Political Prisoners.

Voices of Concern for the Treatment of International Political Prisoners

The vicious May 7 attack on General Radislav Krstic in Wakefield Prison (U.K.) is a dramatic illustration of the failure to ensure the safety of the prisoners of international tribunals.

A Serb native of Bosnia, General Krstic was sentenced to 35 years in prison by the International Criminal Tribunal for former Yugoslavia (ICTY) for complicity in 1995 Srebrenica massacres, although it is acknowledged that he was not directly involved in criminal executions. General Krstic repeatedly denied any knowledge of the massacres at the time, and his sentence is regarded as excessive and politically motivated by many informed observers who believe the case should be reopened.

On May 7, General Krstic was physically assaulted by three inmates identified as "Muslims." A 22-year-old ethnic Albanian named Indrit Krasniqi is reported to have slit the throat of General Krstic, narrowly missing the jugular.

Krasniqi, 22, was serving a life sentence under British law for the gang torture and murder of a 16-year-old girl. Wakefield Prison, in the north of England, is reserved especially for criminals serving long sentences for grave sex offenses.

We find it highly irresponsible of British authorities to incarcerate General Krstic, essentially a prisoner of war, in such an environment. Now 62 years old, General Krstic is disabled, having lost a leg in the Bosnian war. There is an obvious risk in imprisoning a Bosnian Serb accused of grave crimes against Muslims in a region of England with a particularly large Muslim population. The claim that the attack was motivated by "Muslim revenge" serves as a smokescreen to cover the responsibility of British authorities.

The near-fatal attack on General Krstic comes in the wake of an extraordinary series of deaths of prisoners held by the International Criminal Tribunals for former Yugoslavia and for Rwanda.


We, the undersigned, demand:


• An official inquiry into the May 7 incident.


• The immediate transfer of General Krstic to a country able to ensure his personal safety, for example to Norway, or to Serbia as requested by Belgrade authorities.


• An end to the indifference of governments, human rights organizations and the media to the fate of prisoners of ad hoc criminal tribunals, often exaggeratedly stigmatized by the media and without the benefits of the protection afforded by judicial process in normal national courts.


[1] Details of the Krstic case can be found here:
http://www.rnw.nl/international-justice/article/krstic-radislav

Posted by CirqueMinime/Paris at 2:44 AM