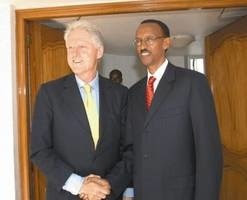 UN Political Prisoners in Arusha Respond to Mutsinzi Report
[It will soon be 16 years since the double assassination of two sitting African heads of state triggered what has come universally to be considered one of the most gruesome mass crimes of the 20th Century: The Rwandan Genocide of 100 Days (6 April to 16 July, 1994).

And though all the evidence gathered by the French investigative magistrate, Jean-Louis Bruguière, and by various agents (mostly Defense lawyers) of the UN's International Criminal Tribunal for Rwanda (ICTR) in Arusha, Tanzania, have built an ironclad case against the current military dictator of Rwanda, General Paul Kagame, and his Rwandan Patriotic Front, those international institutions that should long ago have been clamoring for an investigation into this signal terrorist event, have found themselves bound and gagged by those member-states (US, UK and Israel) who have been the chief sponsors and beneficiaries of the Rwandan genocide--as well as all the other military interventions in service of globalized waste capital.

Seven years after the Rwandan genocide, a similar civil aviation-related terrorist event occurred that also triggered mass killing across the globe: the September 11, 2001, attacks on NYC and Washington, DC. And just as with 4/6/94, nothing that could seriously be called an independent investigation of 9/11/01 has ever taken place.

Almost as an admission of its complicity in the crime, the US government ordered the 911 Commission Report, a sort of brazen comb-over of the few brittle evidentiary hairs to cover the bald-faced lies that founded the popular narrative of what happened on that sunny Black Tuesday in 2001. Ever the star pupil, Kagame’s Rwanda has aped the 911 Commission Report with two of its own: the Mucyo Commission—charging France with complicity in the Rwandan Genocide of 100 Days—and the Mutsinzi Commission—absolving the RPF and charging the former Rwandan (majority Hutu) government with the assassination of its own leader and the liquidation of 10% of its population. Neither of the reports of these Rwandan Commissions is worth the disk space they’d take up on your computer, and the UN political prisoners in the Detention Facility out by the Arusha airport, have put the lie to both of them. And in doing so they have kept hope (for Truth, Justice, and Peace through Reconciliation) alive.

The Obama Justice Department under Eric Holder seems to want to keep the gravedigger’s shovel off the 911 dossier, as well. His idea to try KSM and his associates in NYC—near the putative scene of their putative crime—has brought some interesting opposition—mostly from the Bush/Cheney extended families and their as yet unindicted co-conspirators. I cannot imagine a more bracing, a more enlightening and ennobling experiment than placing the events of 911 into the crucible of the American criminal justice system. Just the discovery hearings—with some of that ADAD crew on D—would give the consensus nonsense mongers the dribbling squirts.

But for now, take some cues—and some clues—from the UN Political Prisoners in Arusha on Rwanda’s 911. –mc]

Subject: An independent inquiry into and the prosecution of the perpetrators of the terrorist attack against the airplane of Rwandan President Juvénal Habyarimana on 6th April 1994.

We, the undersigned detainees of the ICTR, have the honor of sending you, herewith attached, our reaction to the report by a Committee[1] established by the Rwandan government to investigate the attack on President Habyarimana’s airplane. As you will notice, we have demonstrated, on the basis of evidence, the falseness of the report produced by this so-called independent Committee.

Actually, this committee of Experts, composed of eminent RPF members, was given, by the current President of Rwanda, General Paul Kagame, the mission of fabricating exculpatory evidence in order to absolve him and his henchmen, who took part in the murders of the Heads of State of Rwanda and Burundi, seven of their collaborators, as well as the three French crew members of the presidential Falcon 50 airplane. This Committee was also put in place to block the international arrest warrants issued by the French Judge Jean-Louis Bruguière after his eight year inquiry into the terrorist attack of 6 April 1994. In the Mutsinzi Report, we see the RPF’s final attempt to completely silence the truth of its responsibility in the Rwandan tragedy, in general, and in the assassination of President Habyarimana, in particular.

Given its creator, its composition, and its real mission, the Mutsinzi Committee can hardly be independent. It can not produce an objective report because from the first outline of its methodology, it considered a priori that the RPF is innocent and reflexively charged “the Hutu extremists within the former regime” with being the perpetrators of the attack. This is the postulate that prevailed throughout the drafting of the report.

Aside from Paul Kagame’s sycophantic admirers, most commentators, from the moment it was published, described the Mutsinzi Report as partial. Prof. Filip Reyntjens, the Belgian researcher, said that “it is an opportunistic political report of highly dubious quality.”[2] Belgian Colonel Luc Marchal, former UNAMIR officer and the Commander of the Kigali Sector, said: “We had the feeling of having been an audience to a parody of an investigation, the script of which had been written in advance.”[3]

In the long preliminary section about its methodology, the Mutsinzi Committee indicated that it interviewed a large number of witnesses and read hundreds of documents from different sources, including those available from the ICTR. Actually, after reading the report, one discovers that the Mutsinzi Committee systematically excluded all relevant witnesses and documents that were likely to contradict its postulate.[4]

Concerning the motive and circumstances of the attack, the Mutsinzi Committee did not hesitate to repeat, in its conclusions, the outdated theory of a planned genocide of the Tutsi by the former regime, a theory the ICTR Prosecutor has failed, up to now, to demonstrate despite his tremendous efforts and the vast material means at his disposal.[5]

With regard to the technical part of its report, the Committee commissioned a pair of British experts to clarify two points: i.e., to determine the place from where the airplane was fired on, and to identify the type of weapon fired on the airplane. Concerning the place from where the missiles were fired, the two experts were content to read testimony handed to them by the Committee. Without any critique or cross-checking, they concluded exactly what the Committee wanted them to conclude. However, the Committee had excluded all testimony given by the local residents of Masaka and Kanombe that did not support its theory. With respect to the identification of the weapon that was used to perpetrate the crime, the British experts brought nothing substantial to the Mutsinzi Committee. In short, one must conclude that the report of the two British experts is rather fanciful. It is colored by a troubling feebleness that suggests a complicity in the lies and intoxication of public opinion. In our Reaction to the Mutsinzi Report, we demonstrate clearly that the missiles were fired from the Masaka farm and that those missiles were part of the RPF arsenal.[6]

In our Reaction, we looked particularly into those responsibile for the attack. Our conclusion is irrevocable: in the face of Judge Bruguière’s overwhelming evidence against Kagame and his accomplices in the attack of April 6, 1994, the Mutsinzi Committee has made every possible effort to fabricate elements that might impede, however momentarily, the French judicial proceedings. The publication of the Mutsinzi Report fits right into the political stratagem launched by French Foreign Minister Bernard Kouchner with an aim toward renewing diplomatic relations between Paris and Kigali. As Professor Filip Reyntjens[7] quite aptly stated, it is frightening that justice can be so cynically sacrificed on the altar of politics.[8]

The Mutsinzi Committee indicates, without credible basis, that some of those under indictment at the ICTR are the perpetrators of the attack against President Habyarimana’s airplane.[9] These false accusations are nonsense. All those named by the Committee have been in the custody of the ICTR Prosecutor for many years. Despite the fact that the attack against President Habyarimana’s airplane is regarded by the international community as the event that triggered the genocide, the Prosecutor has never charged any of them with that attack. On the contrary, he has continuously avoided arguments on this important factor in the Rwandan tragedy. By so doing, he has prevented the ICTR Judges from hearing evidence in the case. It is in the same attitude that the Prosecutor vehemently opposed the oral motion recently filed by the defense for Joseph Nzirorera in Trial Chamber III, on 18 January 2010.

Since the memorandum on the assassination of President Habyarimana sent you in a letter dated 3 June 1999, the ICTR detainees have constantly reminded you, in their numerous correspondences, of the necessity for an independent inquiry into this terrorist attack. Various commissions of inquiry created to look into the tragic events in Rwanda 1994 have issued recommendations to that effect.[10]

Whereas they have been called upon many times to investigate the assassination of President Habyarimana, the ICTR Prosecutors invariably claimed that this terrorist attack does not fall within their mandate. This position was once again strongly affirmed by ICTR Prosecutor Hassan Bubacar Jallow at the Symposium on the ICTR held in Geneva from 9 to 11 July 2009:

“All the Prosecutors, I believe, have taken a similar position with regard to the
shooting down of the aircraft, and this is that it is not a matter which falls within
the mandate of the ICTR.” [11]

However, there is a notable exception: Mme Carla Del Ponte was dismissed from her position as ICTR Prosecutor because she had expressed an inclination to prosecute the RPF, notably on the basis of the investigation conducted by the French Judge Jean-Louis Bruguière. Previously, she had publicly stated:

“If it is the RPF that shot down the plane, the history of the genocide must be rewritten.”

ICTR Prosecutor Hassan B. Jallow put a stop to all the inquiries that might implicate Kagame and his henchmen. Obviously, he takes advantage of the indifference of the UN toward the assassination of two sitting Heads of State. However, the UN Security Council did not hesitate a single moment in setting up commissions of inquiry into the assassinations of the former Lebanese Prime Minister Rafik Hariri or
the former Pakistani Prime Minister Benazir Bhutto.

Various independent personalities and NGOs have continuously denounced the impunity granted by the ICTR to RPF members responsible for serious violations of international humanitarian law. They rightly consider that such impunity irreparably compromises the reconciliation of the Rwandan people.

Therefore, we fervently request that an inquiry by a genuinely independent commission be initiated to determine those responsible for the 6 April 1994 attack carried out in an area under UNAMIR control, and that the perpetrators be duly prosecuted. This is the only way to counter the dictatorial Kagame regime’s last desperate attempt to bury the truth of the RPF’s responsibility in the Rwandan tragedy. Should the ICTR not be willing to deal with this matter that falls well and truly within its jurisdiction, the UN Security Council and the UN General Assembly are duty bound to come up with a mechanism for entrusting the case to another independent international tribunal.

Notes:
[1] Independent Committee of Experts charged with the investigation into the crash on 06/04/1994 of the Falcon 50
aircraft, registration number 9XR-NN. That Committee was created by Prime Ministerial Decree no. 07/03 of
16/04/2007 (hereinafter called Mutsinzi Committee).

[3] Rwanda: Analysis of the MUTSINZI Report By Luc Marchal & The Collective for the Truth [translated from French by CirqueMinime/Paris], January 31, 2010.

[4] We demonstrated this manipulation in Sections 2 and 3 of our Reaction to the Mutsinzi Report.

[5] We demonstrated the falseness of these allegations made by the Mutsinzi Committee on that subject in Section 1 of our Reaction to the Mutsinzi Report.

[6] See Sections 2 and 3 of our Reaction to the Mutsinzi Report.

[8] The visit of President Nicolas Sarkozy to Kigali, scheduled for 26 February 2010, will mark the normalization of diplomatic relations between the two countries.

ATTACHED:
Reaction of the ICTR Detainees on the Mutsinzi Report [this document is in French. The translation in English will follow].
Attachments:

Posted by CirqueMinime/Paris at 1:09 AM