TRANSLATION OF THE BALKANS: A CONTROLLED DEMOLITION HAS BEEN PULLED AT THE REQUEST OF THE AUTHORS


{Due to the possibility of an infringement of the copyrights of the book translated here below, we have been asked to pull our translation from this blog.  Hopefully this important geopolitical work will be back up here in its entirety very soon. --mc} 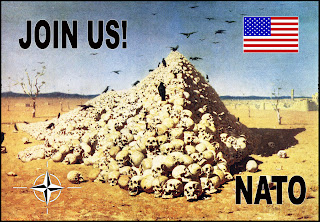 [CM/P may well be alone in sensing a break with the Clintonian (and even pre-Clintonian) past in US foreign and military policies taking place in these early, still-chaotic, artificial-crisis-ridden days of President Obama's second mandate, but the choices of John Kerrey and Chuck Hagel to head the State and War Departments, respectively, seemed to confirm the Chief Executive’s intentions to rein in the allocation of American resources (both material and human) for international armed conflicts.

But what has been clear for some time—though seldom referenced and almost never fully understood—is that all those myriad expressions of America’s ‘humanitarian’ (though always strictly sectarian) militarism, be it in the anti-Muslim (read anti-Arab or anti-Palestinian) crusades to re-colonize Africa and the Middle East, or in the anti-Slavic (read anti-Soviet or anti-Orthodox Christian) campaigns to privatize Europe and Asia (and even Africa, again) away from Russian or Chinese influence, did not just spring full-blown from the head of Barack Obama.  Private wars to secure the interests of Private Capital, though now gone global, had their origins well into the nether reaches of America’s freakishly sordid Christian anti-Communist (read Fascist) past.  And the two signal conflicts that birthed the now-dominant Private Military Contractor models of war, globalized Capital’s corporate militias, were ignited, right after the fall of the Wall, in the Milles Collines of Rwanda and the Balkan Mountains of Yugoslavia.

Yet all critical connections between those two watershed events—begun with the 1 October 1990 invasion of Northern Rwanda from neighboring Uganda, led by US-trained officers of the Ugandan National Resistance Army, supported by thousands of multinational mercenaries (aka, PMCs), and the May Day 1991 battle at Borovo Selo, a tiny shoe-factory suburb of Vukovar, where Croatian Special Police (trained by the diabolical Military Professional Resources, Inc.) tried to swap the Yugoslav flag flying above the Post Office for the recycled Ustashe checkerboard banner of the newly resurrected Croatian (Fascist) Free State—and recent conflicts like those in Syria or Libya, have been washed out by two decades of a flood of toxic, lobotomizing propaganda in favor of Private Capital’s version of History.

Even the once-proud Brookings Institution can come up with no more cogent a comparison of the Obama Administration’s policies toward Syria and Congo (a war which is direct continuation of the 100% US-produced Rwandan regime change of 1994) than this:

Meanwhile, in Syria, while Obama is right to fear a slippery slope to more demanding operations, the most likely scenario for U.S. troops resembles what the North Atlantic Treaty Organization did in Bosnia in the 1990s. First, we arm the weaker side. Then we support it with air strikes. Finally, we help negotiate a peace accord allowing some degree of autonomy for the various sectarian groups within a weak federal structure.[1]

Not to say that the spare accuracy of this policy description would offend any great Brookings alums—like the formidable historian Susan Woodward, whose “Balkan Tragedy” was an early monument to the demolition of the Yugoslav Socialist Federation—, but the notion that US and NATO policies in the Balkans (or Central Africa) were so successful as to recommend them for repetition in Syria (and Congo), or that they should be just cause for pride on the part of the old Clinton/Obama1 war- machine in Libya—“It’s also an opportunity to show that the 2011 Libya mission, of which the president is justifiably proud, was not a one-off.”[2]—demonstrates the kind of short-term memory loss that allows many contemporary geopolitical analysts to describe US diplomatic and military policies—like those expressed in the Wars in Iraq and Afghanistan—as having begun with George W. Bush and 911 and are now being seamlessly continued by President Obama.

However, the information being overlooked by scribblers from the UK Guardian to the Black Agenda Radio (BAR) and NPR is of such crucial importance in describing the historical continuum between then and now, between Globalization’s freeing-up of Private Capital from nationalistic regulations to better ravish the world and Outlaw Waste Capital’s complete devastation of ever-larger and more developed sections of  human civilization, as to make their sniveling and ranting about the murderous villainy of the US Chief Executive seem like school yard slams and petty-jealous Oscar-night Tweets.

But fortune is still smiles on us as two very dear friends, prominent among the Franco-Serb community of Paris (and now Toulon) and former colleagues of mine at Balkans Infos, Louis Dalmas’ pioneering monthly tabloid, have courageously guarded the eternal flame of Truth at the memorial for real victims of Modern Military Wastage.[3]

Gilles Troude and his son Alexis have written a book in French called “Balkans: un éclatement programmé”, which we have taken it upon ourselves to begin translating and have given it the working title, “The Balkans: A Controlled Demolition.”

The book is clear, thorough, concise, and comprehensive in its description of how Western-backed sectarian movements for autonomy, unto independence, are meant to break away, bit by bit, smaller regions from larger sovereignties.  First Yugoslavia, then its constituent federations, Slovenia, Croatia, Bosnia-Herzegovina, but, especially, Serbia and Kosovo, with, eventually, Bulgaria, Rumania and Hungary falling into the thresher.

As certainly should be expect, the US was the lead ship in the attacking armada of privateers that set about to re-colonize this part of the world for Private Capital.  In that spirit—and with the certain knowledge that Anglophones just have no patience for words and names they can’t pronounce—we present here-below Section 2 of Chapter 7 of “The Balkans: A Controlled Demolition”, about the involvement of the US government, as the principal agency promoting, protecting and defending the commercial and financial interests of multinational corporatism, in the dismemberment of the once proud and independent nation of Yugoslavia—and of Southeastern Europe, in general. –mc]


[1] http://www.brookings.edu/research/opinions/2013/02/28-us-syria-congo-ohanlon
[2] Ibid.
[3] More than can be said for the Eternal Flame at the Belgrade Memorial to the victims of the 1999 NATO terror-bombing, which was extinguished in late 2000 on the order of newly (and unduly) named Yugoslav President Vojislav Kostunica, after the NATO/EU-hijacked elections of October 5 that ousted sitting president Slobodan Milosevic.

Posted by CirqueMinime/Paris at 10:17 AM