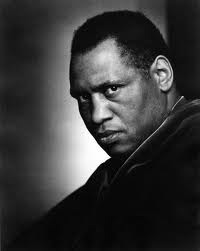 [While on a fact-finding trip to Prednistrovia (Transnistria) in the Summer of 2007, I visited the little museum in the capital, Tiraspol, dedicated to the 1990-92 war of independence against Moldova.  In a square Plexiglas display case I saw a signed copy of Paul Robeson's book “Here I Stand.”  I thought of his singing Old Man River about the Neister instead of the Mississippi.  That and how his face, to me, was the face of US Communism—Robeson, Josephine Baker, WEB Dubois, the Scottsboro Boys, the Tuskegee airmen (cause they flew on the Eastern Front in WWII).  Nothing very serious, just musing.

Then in December of 2007, I visited Moscow to observe the Duma elections of that year and got a real course in contemporary mass democracy: Maximize the Suffrage.  My daughter Yana had given me Barack Obama's “Dreams From My Father” for Father's Day that year, and I was reading it in my room at Moscow’s eastside Holiday Inn when a story came on CNN about Paul Robeson.  Connections were snapping off like JiffyPop in a microwave.

But in late summer 2008, I was driving along the Rhine, heading from Frankfurt to Altzheim to lead a CM/P seminar in Movies and the UnMaking of History for a bunch of German Free Thinkers (they wouldn't be offended if I specified they were all Communists, really).  It was a beautiful scene, with this great river snaking along beside my young comrade's VW, when he stuck a cassette into dash and Robeson's Slavic folksongs started accompanying our voyage down river.

I'd expressed some of my associations to my German friends, mainly the connections I had imagined between Black Americans, like Paul Robeson and Barack Obama, and anti-colonialism, anti-imperialism and anti-Fascism (or, what I like to call just Communism).  My friends warned me that the Free Thinkers I was about talk movies with were not too keen on the would-be first African American President, and that I probably should just shut up about my support for Obama over McCain.

The Germans preferred the admitted war criminal, thinking the mad bomber of Hanoi and miner of Haiphong Harbor would 'heighten the contradictions' in US foreign and military policies more effectively than the putatively anti-war Democrat and, thereby, bring about a speedier end to US imperialism and its global conflagration.

But I couldn't help being led out into confessing my Rorschachian analysis of politics in the country I had abandoned 15 years earlier: African Americans were the slaves; Communism freed the workers of the world from chattel and wage slavery; Robeson was a great Communist; Obama reminded me of Robeson in many ways . . . well, you get it.  But the Germans didn't.

Yet the piece that follows was sent to me by a dear German comrade, Irene Eckart.  And though she as Aryan as the High Lama (played by Sam Jaffe in Capra's 1937 Lost Horizon), I think she is sympathetic with, at least, the tone of some of my free associations.

So here's to Uncle Joe, who left us 60 years ago next month.  And to the great American Communist, Paul Robeson. May their spirits, which are still alive in today's Russia, guide more world leaders toward the Reason and Decency our global society so badly needs. –mc] 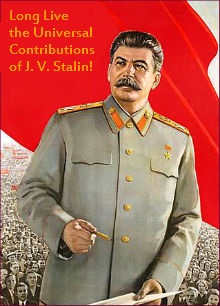 Paul Robeson was an interationally renowned musical theatre artist, a stage and film actor and an outstanding  athlete.  He studied at Columbia Law School. He was the first black actor to perform Shakespeare's Othello.

Below is the full text of a tribute by Paul Robeson to Joseph Stalin upon Stalin's death on March 5, 1953. It was published in New World Review, April, 1953, and reprinted in Paul Robeson Speaks, edited by Philip Foner, pp. 347-349. We are exhibiting it in commemoration of the 100th anniversary of Paul Robeson's birth on April 9, 1898.


TO YOU BELOVED COMRADE

There is no richer store of human experience than the folk tales, folk poems and songs of a people. In many, the heroes are always fully recognizable humans - only larger and more embracing in dimension. So it is with the Russian, Chinese. and the African folk-lore.


In 1937, a highly expectant audience of Moscow citizens - workers, artists, youth, farmers from surrounding towns - crowded the Bolshoy Theater. They awaited a performance by the Uzbek National Theater, headed by the highly gifted Tamara Khanum. The orchestra was a large one with instruments ancient and modern. How exciting would be the blending of the music of the rich culture of Moussorgsky, Tchaikovsky, Prokofiev, Shostakovich, Khrennikov, Gliere - with that of the beautiful music of the Uzbeks, stemming from an old and proud civilization.
Suddenly everyone stood - began to applaud - to cheer - and to smile. The children waved.


In a box to the right - smiling and applauding the audience - as well as the artists on the stage - stood the great Stalin.


I remember the tears began to quietly flow. and I too smiled and waved Here was clearly a man who seemed to embrace all. So kindly - I can never forget that warm feeling of kindliness and also a feeling of sureness. Here was one who was wise and good - the world and especially the socialist world was fortunate indeed to have his daily guidance. I lifted high my son Pauli to wave to this world leader, and his leader. For Paul, Jr. had entered school in Moscow, in the land of the Soviets.

The wonderful performance began, unfolding new delights at every turn - ensemble and individual, vocal and orchestral, classic and folk-dancing of amazing originality. Could it be possible that a few years before in 1900 - in 1915 - these people had been semi-serfs - their cultural expression forbidden, their rich heritage almost lost under tsarist oppression's heel?


So here one witnessed in the field of the arts - a culture national in form, socialist in content. Here was a people quite comparable to some of the tribal folk of Asia - quite comparable to the proud Yoruba or Basuto of West and East Africa, but now their lives flowering anew within the socialist way of life twenty years matured under the guidance of Lenin and Stalin. And in this whole area of development of national minorities - of their relation to the Great Russians - Stalin had played and was playing a most decisive role.


I was later to travel - to see with my own eyes what could happen to so-called backward peoples. In the West (in England, in Belgium, France, Portugal, Holland) - the Africans, the Indians (East and West), many of the Asian peoples were considered so backward that centuries, perhaps, would have to pass before these so-called "colonials" could become a part of modern society.


But in the Soviet Union, Yakuts, Nenetses, Kirgiz, Tadzhiks - had respect and were helped to advance with unbelievable rapidity in this socialist land. No empty promises, such as colored folk continuously hear in the United States, but deeds. For example, the transforming of the desert in Uzbekistan into blooming acres of cotton. And an old friend of mine, Mr. Golden, trained under Carver at Tuskegee, played a prominent role in cotton production. In 1949, I saw his daughter, now grown and in the university - a proud Soviet citizen.


Today in Korea - in Southeast Asia - in Latin America and the West Indies, in the Middle East - in Africa, one sees tens of millions of long oppressed colonial peoples surging toward freedom. What courage - what sacrifice - what determination never to rest until victory!


And arrayed against them, the combined powers of the so-called Free West, headed by the greedy, profit-hungry, war-minded industrialists and financial barons of our America. The illusion of an "American Century" blinds them for the immediate present to the clear fact that civilization has passed them by - that we now live in a people's century - that the star shines brightly in the East of Europe and of the world. Colonial peoples today look to the Soviet Socialist Republics. They see how under the great Stalin millions like themselves have found a new life. They see that aided and guided by the example of the Soviet Union, led by their Mao Tse-tung, a new China adds its mighty power to the true and expanding socialist way of life. They see formerly semi-colonial Eastern European nations building new People's Democracies, based upon the people's power with the people shaping their own destinies. So much of this progress stems from the magnificent leadership, theoretical and practical, given by their friend Joseph Stalin.


They have sung - sing now and will sing his praise - in song and story. Slava - slava - slava - Stalin, Glory to Stalin. Forever will his name be honored and beloved in all lands.


In all spheres of modern life the influence of Stalin reaches wide and deep. From his last simply written but vastly discerning and comprehensive document, back through the years, his contributions to the science of our world society remain invaluable. One reverently speaks of Marx, Engels, Lenin and Stalin - the shapers of humanity's richest present and future.


Yes, through his deep humanity, by his wise understanding, he leaves us a rich and monumental heritage. Most importantly - he has charted the direction of our present and future struggles. He has pointed the way to peace - to friendly co-existence - to the exchange of mutual scientific and cultural contributions - to the end of war and destruction. How consistently, how patiently, he labored for peace and ever increasing abundance, with what deep kindliness and wisdom. He leaves tens of millions all over the earth bowed in heart-aching grief.


But, as he well knew, the struggle continues. So, inspired by his noble example, let us lift our heads slowly but proudly high and march forward in the fight for peace - for a rich and rewarding life for all.

In the inspired words of Lewis Allan, our progressive lyricist -