Further on Libya's 2010 Call to the UN for Adjudicating Crimes Against Peace: The International Community MUST Address the Murders of Revolutionary Leaders. 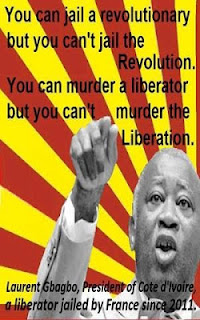 Much as in Mali and Libya, in Côte d'Ivoire France acted in the interests
of the Western IFIs that stole CI's 2011 elections and turned the country
over to Burkinabe agents Alassane Ouattara and Blaise Compaore

To fill out the small list cited inside the letter, here are the names of those African leaders who were assassinated by Western Imperialist powers just since 1963.  Since this group of goepolitical martyrs seems to be part of a campaign to further demonize France over Mali and Libya, it should be noted that four entries, Presidents Ndadayé and Ntaryamira of Burundi, Habyarimana of Rwanda, and Laurent-Desiré Kabila on Zaire/Congo were, in fact, the victims of US/UK/Israeli-backed 'Tutsi' terrorists of the Rwandan Patriotic Front, a Ugandan-born movement to 'liberate Rwanda' {from 'Hutu' majority-rule}, led by current Rwandan president Paul Kagame and credited with instigating the bloodbath that swept Rwanda in 1994-95 and continues in Congo today.

France certainly merits no absolution from us when it comes to its neo-colonial unto neo-feudal comportment.    But when horrific crimes are misattributed as a way of covering up the truly culpable--much has been done in the US with President Obama by his enemies on the left as well as the right (whose putatively divergent interests seem to find confluence in a shared intention to add the name of the first African-American Chief Executive to his above- listed comrades) as a diversion from the real perps who cravenly serve Waste Capital and as a minimization unto trivialization of a resurgent mass-democratic tendency in the US. --mc]

Posted by CirqueMinime/Paris at 10:10 AM