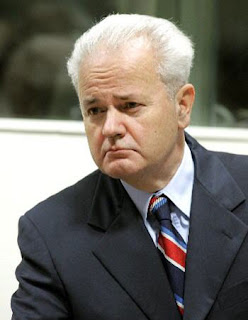 Milosevic Put His Accusers on Trial--Interview with Cathrin Schütz--Published in Junge Welt, March 11, 2011. Translated from the German by John Catalinotto.
[We were supposed to be in Vienna this weekend, Max and I. But, you know, force majeur, disruptions in the Domestic Tranquility, and all that.


So this post is to let the comrades know that we will always be with them in Revolutionary Spirit. And we want to thank them all for keeping the political and moral lessons we all learned from the trials of Slobodan Milosevic, way back when, alive and fresh for Max's and Seina's, for Beckett's and Francis' and Zoé's, and all subsequent generations to grown on.


Long live the legacy of President Slobodan Milosevic! Long Live a Free and Sovereign Serbia and a heroic Yugoslavia!


(And especial thanks to The Cat Man and the IAC for this translation from the German.)--mc]

*In January 1999, casualties from a battle between KLA commandos and Serb police and army in Racak, Kosovo, were disguised as civilians, and Western politicians and media used the incident to promote anti-Serb propaganda leading to the war.--Translator

Published in Junge Welt, March 11, 2011. Translated from the German by John Catalinotto.

Posted by CirqueMinime/Paris at 9:22 AM