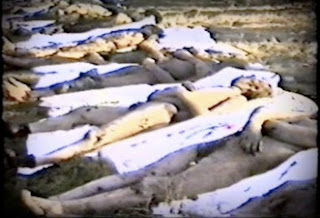 A hole in the ground with some animal bones in it is transformed into a mass grave containing more than 1200 (or maybe even 1700) bodies. The TNC [Transitional National Council] had finally to admit, “the bones were too big to be human bones. This is undoubtedly something else.” But most of the media said nothing at all about this statement. . . .

The virtual mass graves around Tripoli were already up and running by last February: with a video and some photos, the American website, One Day on Earth, passed them off as brand new body dumps in August 2011.

Everybody believed it, and even when the trick was exposed a few days later, who said anything? Still lingering in the mind, “the graves hastily dug by Kadhafi’s militias” held a portion of the “ten thousand dead and fifty thousand wounded demonstrators.” The figures came from a 22 February Tweet by the Saudi broadcaster, Al Arabiya, supposedly originating from a self-proclaimed Libyan member of the International Criminal Court, which disavowed this allegation the very next day. But a feckless disavowal, as always.

This is how the Nazis taught propaganda[1]: Tell a Big Lie and repeat it as if on a broken record; and all denials disappear.

Today, the NATO belligerents remain totally silent about their renewal of Operation Unified Protector, on-going for the last three months of this year. It was surely useful to get back to the “demonization of the enemy as a way to justify the International Humanitarian Presence and further legitimize the new Libyan regime.”

So on Sunday, September 25, 2011, Salem Fergani, a member of Abdel Jalil’s TNC (designated since February as the sole representative of the Libyan people, and subsequently recognized as such by many different countries), yanked from his magician’s hat (a prop issued to all TNC members, it seems) another horror: a mass grave of murdered prisoners.

The first joyous report of this new find was most likely from Al Jazeera, which, without casting the least doubt on the facts, headlined its English-language version: “Mass Grave of Libyan Prisoners Found.” The article went on to say: “A mass grave was discovered with the remains of 1700 murdered prisoners. The news broke on Sunday, while hundreds of TNC troops were entering Syrte, a town that NATO planes had bombarded twice already that day.”

Obviously, Al Jazeera was not concerned about the besieged town of Syrte, showered with Grad missiles (when Kadhafi loyalists use them, NATO bombards the whole regime. These are, in effect, ‘blind weapons’ and, thus, pose a serious “threat to civilians”), or for the other towns full of civilians bombed by NATO.

And as to the mass grave, this was the report: “Khalid Sharif, spokesperson for the military council of the TNC, told us, ‘We found the spot where all these martyrs are buried’,” adding that this is “proof of the criminal acts of the Kadhafi regime.” Necessary proof. And Salim Al Ferjani, a member of the TNC Committee assigned to identify the remains, stated: “They doused the bodies with acid to eliminate any traces of identification.” This is like the killers adding an extra taste of cruelty.

Then the TNC decided it would be cool to send journalists right to the scene. And here is what the anything-but-pro-Kadhafi CNN found there: rather than the bones of thousands of human victims, there were some animal bones and no signs of any excavation.

The first version of the CNN story, visible until Monday morning, was a statement by the TNC, but later the cable news network added: “It has not been clearly established that the site was a mass grave, because there is no evidence of any digging having taken place. They showed some bones to the media, but doctors present at the scene with the CNN crew verified that these were not human bones.”

Then that sentence was taken out of a subsequent article, removing any reference to the presence of doctors, but keeping the expressions of doubt, and became: “The TNC suspects the existence of a mass grave, though there are no signs of digging and no human remains were found. A crew from CNN was sent to the scene, a muddy field, with other representatives of the media, and found only bones that were apparently from animals.”

But it did not stop there: CNN went on to specify that, according to Abdel Jalil’s “revolutionaries,” the site was identified earlier on 20 August. If that is the case, why is the media making all this noise now?

And the best is yet to come. After a few hours, CNN pulled the link and in its place was: “The TNC explained to reporters that some of the bones found were too big to be from humans.” Speaking for the TNC, Jamal Ben Noor made this painful admission: “The site may have been something else. We are investigating.”

We are waiting on the next development.

However, a few hours after this half-hearted retraction, the Italian daily, La Repubblica, on its internet site, continued clinging to the line put out the night before by Al Jazeera, considered an almost divine source: “A mass grave containing 1200 bodies was found in the vicinity of the Abu Salim prison. The TV station, Al Jazeera (which considers itself ‘Pan-Arab’), confirmed the news story but did not furnish any additional details.” (Our emphasis). Then Repubblica.it added that among the bodies, there were not only prisoners from 1996, but also some of today’s insurgents.

The 26 September La Repubblica newspaper dedicated all of its page 17 to an article by Renato Caprile, from Tripoli, about this sad discovery: “1700 bodies (as if each corpse were right there, as evidence, under the reporter’s gaze), “one of the most terrifying mass graves ever uncovered.”

The journalist was sent to the scene to witness for himself this “cemetery without tombstones” that the TNC ‘activists’ (a more polite term than ‘mercenaries’ or ‘militia’) had up-dated “yesterday.” “Evidence of a massacre”: another allegation necessary to this war.

And Caprile writes: “Some shreds of cloth were found, bloodstained and faded by the weather.” (One TNC soldier found the uniform, with its name-tag fast on its breast like a religious medallion, identifying his old friend, Abdul Salem. The name was still legible, as was the hole from the projectile that killed him 15 years ago; he was found as if “by a miracle”—yeah, that’s for sure.): “evidence of a massacre.” Among the “skulls, femurs, tibias, ribs piled randomly here and there.”

For the rest, a few weeks ago, Repubblica.it spoke of the denunciations of Kadhafi’s women warriors (“He, all his sons and ministers raped us”: another classic from the war in Libya), without checking the sources from which they originated, a source strongly discredited by the UN, itself.

As for the Benghazi psychologist, Sergewa, who started the entire campaign of defamation about “Kadhafi’s mercenaries being mass rapists,” a campaign that has been shown to be false: La Repubblica does not recall that this psychologist had already lied to the UN and Amnesty International. And AI is certainly not pro-Kadhafi.

For example, Amnesty, which long ago denounced loudly and clearly the siege of Misrata by Kadhafi loyalists—see the report, Misrata Under Siege—has remained silent for weeks about the siege of loyalist towns, towns that NATO bombed and that the TNC has openly attacked with Grad missiles. These Grads, the missiles the UN, itself, has described as “blind weapons.” A threat to civilians . . .

Originally in Italian, the article was translated into French by Cécile Lienhard for Investig’Action. The English translation from the French is by CM/P.

[1] Though Reich Minister for Propaganda Josef Goebbels claimed he learned everything he knew about selling The Big Lie from the Americans.

Posted by CirqueMinime/Paris at 6:08 PM