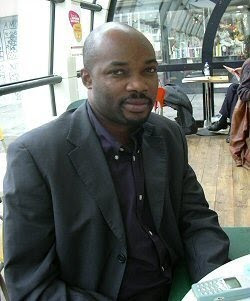 New investigative book on Sudan: Al-Bashir & Darfur: The Counter-Investigation - by Charles Onana
[Here's the Press Release for Charles Onana's new book on Sudan and its president, Omar Hassan Al-Bashir, their relations with the Palestinians, Iraq and China, and the International Criminal Court (ICC or Rome Court, another Tribunal in The Hague) and its Prosecutor, Luis Moreno Ocampo, and how all this has put Sudan at the top of the West's hit-list.

The book is currently only in French (cm/p translated this Press Release as a gesture of solidarity with one of our favorite geopolitical analysts of African affairs—Onana was among the first to pull the covers off that imperialist melodrama about warring tribes of machete-wielding savages bringing about the mass killings of 1994, now known as the Rwandan Tutsi genocide of 100 days—and THE first journalist to incur the litigious {and fruitless} wrath of Rwanda's self-elected president, Paul Kagame, with the publication in 2002 of his “The Secrets of the Rwandan Genocide” (which, Mr. Onana tells me has just been rendered into English), wherein he anticipated by several years French anti-terrorist Judge Jean-Louis Bruguière's finding that Kagame and his RPF were responsible for the deaths of the two Hutu Presidents of Rwanda and Burundi, Juvénal Habyarimana and Cyprien Ntaryamira, respectively, that supposedly triggered the mass killings, when he had the Falcon 50 executive jet carrying the two African heads of state, their entourages and the French civilian flight crew, blown out of the sky above Kigali’s airport on 6 April 1994 with two SAM 16 missiles borrowed from Ugandan NRA stocks); but even if Elmore Leonard or Richard Price or Jean Le Carré were to translate Onana's book, it is difficult to imagine this monumental work's being welcomed by the anglophone reading public, ever-content to baste in its own ignorant, self-righteousness.

Too many consensus bad guys (if George Clooney, Ben Affleck, Mia Farrow and Brangelina think Al-Bashir is the genocidaire of Darfur, well, . . . then . . . I guess he's gotta be, right?) are shown to be more the patriotic defenders of their nations' material and human resources against US/UK/Israeli and UN imperialist strivings, than the ruthless exploiters unto assassins of their own peoples.

But if any of I.F. Stone's journalistic courage and dedication to Historical truth still exists in that sadly degraded literary culture that is the US's, and if its new, seemingly bibliophilic President has any genuine concern for peace and reconciliation through Truth and Justice in the land of his paternal ancestors, even with all the yellows at The Huffington Post and the outright war criminals at the NYT, The New Yorker and the NYRB turning readers heads toward phoney History, fake Art and False Consciousness: then Charles Onana's work (along with that of Pierre Péan, Gaspard Musabyimana, Edouard Karemera and Faustin Ntilikina) just might have a shot at being the first genuine, independent Central African analyst to be translated and published in English—and—why not?—racked on the front shelves of Barnes & Noble. —mc]

Regarding his 1994 arrest by the Sudanese Secret Services and eventual transfer to agents of French counter-intelligence, the famous Venezuelan, pro-Palestinian revolutionary and terrorist, Ilich Ramirez Sanchez, better known as ‘Carlos,’ recently told journalist Charles Onana: “I was locked away for 15 years in French jails because of Khartoum’s betrayal of the traditional generosity and honor of the Arab peoples. That, in itself, should discourage people from suspecting me of being particularly forgiving toward the Sudanese regime, however, I am in full support of national sovereignty for the Sudanese, based on revolutionary principles and out of respect for Justice.”

This astonishing testimony as well as the exact circumstances of Carlos’ arrest in Khartoum are reported in the exceptional book by Charles Onana, focused on the charges brought by the International Criminal Court (ICC) against the President of Sudan, Omar Hassan Al-Bashir, for the “genocide of Black (Africans) in Darfur.”

At the end of his counter-investigation, which took two years in Sudan, the US, Canada and France, the journalist discovered that some sixty American, pro-Israel organizations met under the tent of Save Darfur, with the support of Elie Wiesel, of the actor George Clooney, of the Bush government and of Bernard Kouchner, to work for the destabilization of the regime of President Al-Bashir, who had taken part in the 1973 Yom Kippur war against Israel. Al-Bashir had also been opposed to the war against Saddam Hussein’s Iraq. Because of his pro-Palestinian commitment, the Sudanese Head of State, who had opened the gates of his country to all Palestinian organizations, including Hamas, became the target of pro-Israel organizations such as Save Darfur in the US and Urgence Darfour in France.

Having been put on the black-list of countries that support international terrorism in 1993 by Bill Clinton and the US State Department, Sudan, in order to be rid of this image, first turned Carlos over to France then offered the Americans to arrest and deliver Osama bin Laden (1996). But, as Onana points out, the White House categorically refused Sudan’s offer. Since that time, Sudan has lived under the threat of US economic sanctions, and its President is currently being accused by the Prosecutor at the ICC of being responsible for “a genocide in Darfur.” Indignant over the attitude of the West, Al-Bashir decided to contract the drilling of his nation’s abundant oil reserves to China, a country which has always supported the right of the Palestinians to self-determination. After that, an international coalition formed to get rid of Al-Bashir and to impose a new war on Sudan.

This counter-investigation, thoroughly documented and set directly against the current of today’s media discourse on Al-Bashir and Darfur, brings about a new understanding of the different facets of the contemporary battle being waged by the US, Israel and China in Africa and Sudan.
The author describes and analyzes the impact of foreign interference on this country. He especially reveals the hidden face of International Justice and particularly the Prosecutor at the ICC, Luis Moreno-Ocampo, the principal artisan of the international arrest warrant against President Al-Bashir.
Posted by CirqueMinime/Paris at 9:11 AM