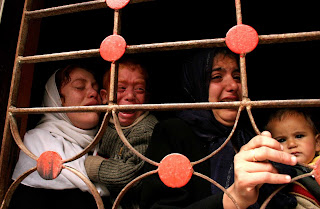 Palestinian family mourns
Netanyahu’s 10-month settlement “freeze” a sham -- by W.E. Gutman
[Our friend Willy Gutman (blessedly no relation to Roy) sends us this piece on Benjamin Netanyahu and his bogus 'settlement freeze.' Bibi was one of the leading figures in the Zeitgeist transplant that exchanged a played-out anti-Communism for a far more maniacally irrational anti-Terrorism.

At the end of the 1970s, with Carter's Nat’l Security Adviser Zorro Brzezinski’s bear baiting an enfeebled USSR into defending its Afghan neighbor against the systematic ravages of its political and social organizations by a CIA/MI6/Mossad campaign of mercenary (mujahedeen) murders, and the rest of the Middle East, from Beirut to Baghdad to Tehran also falling into Reagan’s pre-Alzheimer’s militarized chaos--with the US and Israel supplying the firepower to all sides and the Muslim street supplying the body-count--it was apparent that the 'Red Menace' would need some kind of Max Factor make-over.

We can sample (yet again) Thierry Meyssan's take on the origins of 9/11 and the War on (or as Borat prefers, War OF) Terrorism from the sequel to his monster bestseller 'L'Effroyable Imposture,’ surprisingly enough called 'L'Effroyable Imposture 2,’ where he describes Netanyahu's formation of the Jonathan Institute, ostensibly to honor his brother, Yoni, who died in the Entebbe (Uganda) raid, but really to launch a campaign involving the intelligence agencies of the most powerful countries to hasten the fall of the USSR. The hook was that all heretofore national terrorist movements, like the IRA or ETA or The Red Army Faction, would be subsumed under the rubric of Arab or Islamic Terrorism, and then that would be linked through sponsorship to Soviet Imperialism—the kind of ‘Imperialism-in-reverse’ that really broke and brought down the SU.

With the end of the 1980s, this paradigm-shift--really a reconfiguration of the old Nazi dream--was successfully brought off. But, as with the end of WWII, the insatiable concupiscence of the Great Powers for high turnover military production and the vast, indiscriminate destruction it produces, could not be calmed. All cheerful chirping in the Clinton White House about divvying up a 'Peace Dividend' was seamlessly modulated into a dreadful oration against the oppression of religious and ethnic and national minorities, for delivering justice to the victims (a fancy call for revenge), and, especially, Stopping the Fucking Genocides.

The Middle Eastern wars of the 1980s carried right on into the 1990s and the new Millenium--with peripheral outbreaks in Southeastern Europe and Central Africa--and eventually in Central Asia and Russia's 'near abroad.' But in this decades-long tug-of-war between Good and Evil, the rope was never out Bibi Netanyahu's bloody hands.

Now he is back behind the Israeli PM's desk and will certainly exert significant pull against any tendencies my president Obama might demonstrate toward actually earning that Nobel Peace Prize at the expense of the Israeli military/medical/financial (i.e., organ banking) complex.

So we are truly blessed to have the Good Will of W.E. Gutman speaking from the Hebrew traditions of Reason and Tolerance against what promises to be another Hell-bent on Self-Wasting Israeli military regime.

I can only think that had Iranian President Mahmoud Ahmadinejad spoken Gutman's words (as he seems to have done on several occasions), he would most assuredly be trashed, tarred and re-tarred as a 'revisionist,' a 'negationist,' or just an 'Anti-Semitic Holocaust denier.' But our Mr. Gutman is far too eloquent in far too many languages to ever be so mistranslated or misunderstood. --mc]

In an editorial published back east in August 1997 I urged Israeli Prime Minister Benjamin Netanyahu to resign. I opposed the expansion of settlements in Israeli-occupied areas of Palestine and called for an immediate and permanent cessation to the expropriation of Arab lands, a practice still regarded around the world as a blatant provocation and an open invitation to unrest and violence.

I further argued that dastardly alliances with jingoist generals, unholy covenants with religious zealots in Brooklyn and in Jerusalem who use ideological extortion to force a theocracy on a largely secular society; the inexplicable compulsion to scuttle peace negotiations, a wrathful disdain toward international censure, a savage antipathy toward the Palestinian people -- all hallmarks of an administration oscillating between clumsiness and aberration – posed grave dangers to peace in the Middle East.

In short, Mr. Netanyahu’s regime, I said, was a calamity and a recipe for disaster.

My views, roundly criticized in the press, would be validated by ensuing events. Mr. Netanyahu’s stern and capricious governance brought not one iota of security -- perceived or actual -- to Israel. Instead, as successive political crises between his government and the Palestinian Authority deepened, Jews and Arabs became mired in frustration and endless conflict.

His combative style and pugnacious rhetoric exhumed and re-ignited old hatreds, reopened unhealed wounds, fomented a new swell of cynicism, misgivings and suspicions. Israelis were demoralized. Israel’s friends abroad were exasperated. Negotiating partners were unnerved. Bitterness and rancor deepened with every stroke of his ministerial pen, with every hostile decree, every calculated vacillation, every broken word, every rubber bullet fired at stone-throwing youths.

This pernicious alchemy, in the name of national defense, yielded confusion, anxiety, sorrow and, yes, insecurity. Stimulated by the wild possibility of a peaceful settlement of their protracted conflict, Israelis and Palestinians were now bewildered and apprehensive. Neither side could endure the suspense and agony of occupation, piecemeal concessions and erratic, snail-paced progress routinely nullified by spasms of retributive violence.

Last, echoing the musings of distinguished Israeli journalist Yosef Lapid, who wrote that the prime minister exhibited “a crass disregard for reality and humanism,” I described Mr. Netanyahu’s vision of peace and security as “trapped in paranoia and the corruptive forces of chauvinism.”

Twelve bloodstained years later, and after weeks of infighting, Benjamin Netanyahu was reelected Prime Minister. It was clear from day one that he was putting Israel on a new collision course with the Palestinians, Arab neighbors and even its long-time American ally. His elegant oratory, which betrayed his notorious ultra-nationalism, his intransigence and deep-rooted hostility toward Arabs, ruled out any possibility that a modus vivendi could ever be reached.

MIT-educated Netanyahu laid waste to the delicate foundations for peace that were being erected. Issued from the sword and resting on the Bible, his policies have daunted and discouraged serious attempts to bring about regional security and stability. His lifelong antagonism toward the Palestinians, whom he considers “a sinister and divisive element,” has palliated the religious Right, whose enormous financial resources helped underwrite his campaign and whose gluttonous territorial expansionist objectives he has vigorously endorsed.

Prodded by the Obama administration to freeze settlements as a way of jump-starting the comatose “peace process,” Mr. Netanyahu grudgingly announced a 10-month ban on new housing projects in the West Bank.

“How can we believe the words of a prime minister who promised that our communities would flourish,” asked the spokesman of a settler group on the West Bank -- “and now freezes them?”

Valid point. A better question might be: “How can the rest of the world trust the pronouncements of a man whose actions have clearly betrayed a strategic distaste for peace?” The answer may astonish the settlers but will surprise few political pragmatists. First, the freeze excludes East Jerusalem. Second, Mr. Netanyahu, who has immodestly asked that the Palestinian Authority “take advantage of the 10-month window and resume negotiations,” will exploit any predictable disturbance to rescind the freeze.

Given these sobering realities and the volatile political landscape on which he has cast his shadow, it is disheartening to conclude that the once-and-yet-again prime minister, his colossal ambitions fulfilled and his hawkish supporters placated, is simply unable to understand that hard line begets hard line, that security by intimidation, repression and economic persecution produces animosity and insecurity, that he who sows the wind reaps the tempest.

Meanwhile, as the Palestinians, outnumbered, marginalized, strangers in their own land, are fighting to preserve fragments of their patrimony, a new synagogue is rising on confiscated land.
__________
W. E. Gutman is a widely published veteran journalist and author, and a former press officer at Israel’s Consulate General in New York. .
Posted by CirqueMinime/Paris at 3:18 PM